PVC comes in two basic forms: rigid (sometimes abbreviated as RPVC) and flexible. The rigid form of PVC is used in construction for pipe and in profile applications such as doors and windows. It is also used for bottles, other non-food packaging, and cards (such as bank or membership cards). It can be made softer and more flexible by the addition of plasticizers, the most widely used being phthalates. In this form, it is also used in plumbing, electrical cable insulation, imitation leather, signage, inflatable products, and many applications where it replaces rubber

Pure poly(vinyl chloride) is a white, brittle solid. It is insoluble in alcohol but slightly soluble in tetrahydrofuran. 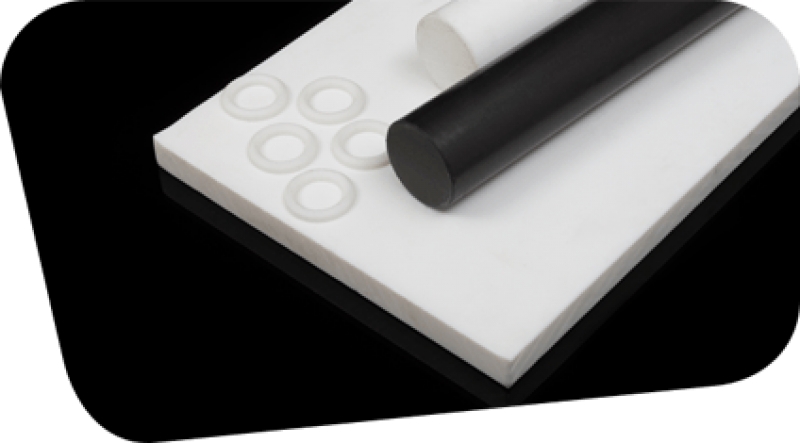 Polytetrafluoroethylene (PTFE) is a synthetic fluoropolymer of tetrafluoroethylene that has numerous applications. The best known brand name of PTFE-based formulas is Teflon by Chemours.[2] Chemours is a spin-off of DuPont Co.,[3] which discovered the compound in 1938.[2]

PTFE is a fluorocarbon solid, as it is a high-molecular-weight compound consisting wholly of carbon and fluorine. PTFE is hydrophobic: neither water nor water-containing substances wet PTFE, as fluorocarbons demonstrate mitigated London dispersion forces due to the high electronegativity of fluorine. PTFE has one of the lowest coefficients of friction of any solid.

PTFE is used as a non-stick coating for pans and other cookware. It is very non-reactive, partly because of the strength of carbon–fluorine bonds, and so it is often used in containers and pipework for reactive and corrosive chemicals. Where used as a lubricant, PTFE reduces friction, wear and energy consumption of machinery. It is commonly used as a graft material in surgical interventions. Also, it is frequently employed as coating on catheters; this interferes with the ability of bacteria and other infectious agents to adhere to catheters and cause hospital-acquired infections.